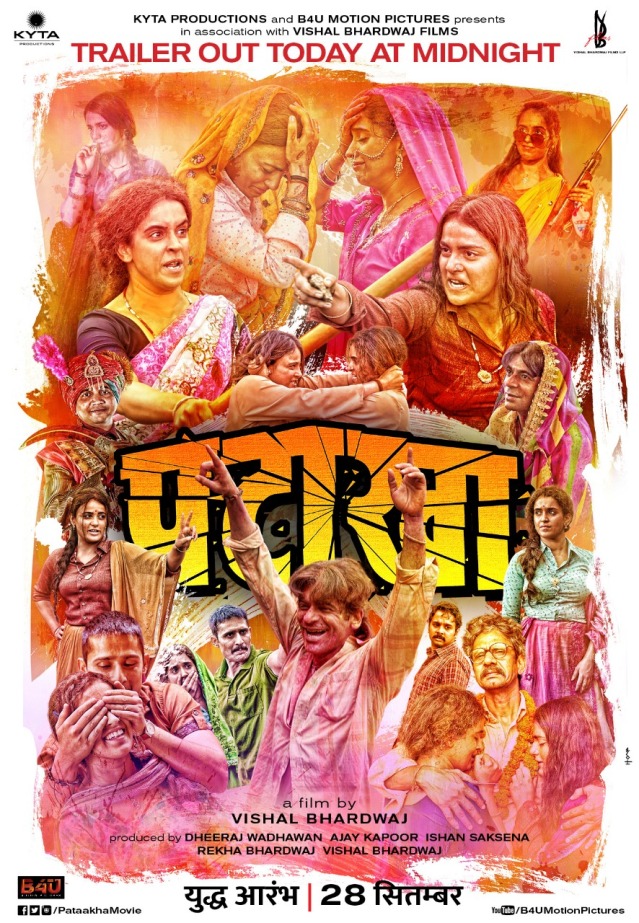 Vishal Bhardwaj’s Pataakha trailer has been unveiled ,  the night when India and Pakistan truly became two nations. The film is based on tale of two perpetually fighting sisters which the director finds to be perfect metaphor for India- Pakistan. Radhika Madan and Sanya Malhotra will be seen playing sisters, who keep waging war with each other at slightest provocation.
Speaking about his perspective on psychology of sisters, he says,”Siblings fight like crazy for the most superficial of reasons. India and Pakistan were born from the same subcontinent and have been fighting continuously for more than 70 years. Kuch hi saalon mein 100 saal ho jayenge iss ladayi ko. Just like Badki and Chhutki in the film, we are so used to fighting since birth, we don’t know any other way to be. Agar kal ko Kashmir resolve bhi ho jaye, we wouldn’t know what to do. And so like in our movie, we have quoted Atal Bihari Vajpayee ji as saying that we can choose our enemies, but we can’t choose our neighbours, so the sisters have to learn to co-exist. We have tried to use this story to give our own take on Indo-Pak relations in a light-hearted manner. India-Pakistan hi hamari Badki aur Chhutki hain.”
Pataakha is a comedy-drama about two sisters, Badki and Chhutki and is based on an acclaimed short story by renowned writer Charan Singh Pathik. It is being directed by Vishal Bhardwaj and produced by Vishal Bhardwaj Films LLP and Kyta Productions. It stars Sanya Malhotra, Radhika Madan, Sunil Grover and Vijay Raaz. The film will release on September 28, 2018.